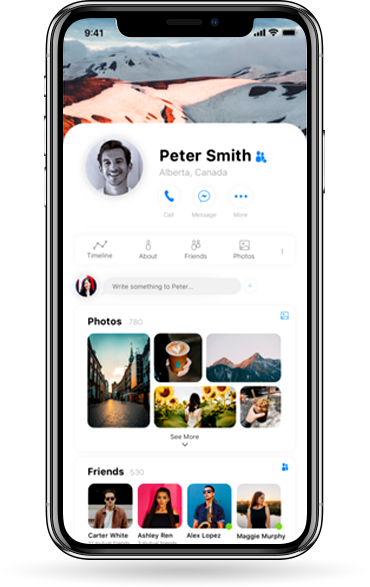 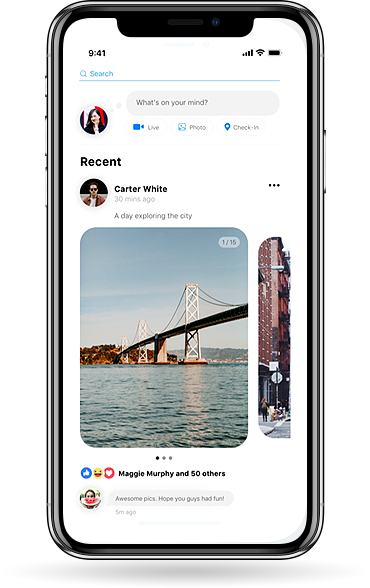 Social media apps are now becoming a global phenomenon for online socializing, collaboration and entertainment. From Facebook to Twitter, both social networks follow a unique concept but the core foundation of these apps is the same. While the thought to create app like Facebook or Twitter surely does sound interesting but now several apps following the same foundation and concept exist. You must be wondering how yours can look and be unique, no?

Well, to help you saturate your ideas and guide you to build an app like Facebook, our app development firm has earned the expertise and recognition in designing, developing and publishing contemporary social media apps for an affordable price.

We have worked with some of the most reputable clients worldwide and our expertise knowing how to create an app like Facebook has helped us become globally renowned. Here are some of the features we shall add to your social media app.

There will be a private newsfeed for every user who registers to the app.

Add friends from around the world and interact with them in real-time.

A customized personal timeline where users can update personal details, interests and even ideologies.

Push notifications will be enabled to quickly notify users about the latest updates and events.

Users can create pages related to their interests, for brands and business purposes.

Private chats where multiple users can chat without any invasion of privacy.

Option to stream video content on the social media app without any interruptions.

Videos, images, and posts can be shared with other users or on the personal profile of users.

Get In Touch With Industry Experts Today!

Connect with some of our top app developers to get a clear sense of what
developing your app is going to take.

How We Bring Your App Ideas Into Existence

The last phase of the app development life cycle is its launch. The app will be launched on the app store of your chosen app platform but we make sure it has been published to secure the highest rank on the category it belongs to.

In the digital era, it has become easier for developers to create clones of popular social networking and media apps. However, at our app development firm, we do not create exact clones of renowned apps instead; we only take the gist of the concept and curate the apps entirely on personalization and customization.

For that reason, the cost to make app like Facebook varies on many levels. Firstly, we assign a team of developers for your project and then the brainstorming process begins to find the best features suited for your social media app. The list of features, app design, complexity, selection of operating system and the overall time needed to make your app is what determines the final cost of app development.

A: Facebook has delicate and different aspects of development. For example, ERLANG for chatting, PHP for front-end with Java, and C++ spread around in different facets, which is why Develop App Like teams comprise of developers who are experts in all these programming languages.

A: Yes, you can create an app like Facebook on Android Studio. Considering the native android development on JavaScript and C++, you can use Android Studio as a primary tool. However, we offer services for Android as well as iOS here at Develop App Like.

A: It may take months in order to develop an app like Facebook. That is considering the intricacies of development as well as testing and API integration. Nevertheless, our experts at Develop App Like trim down the time taken to develop; they also save you a lot of money.

A: Facebook is a social media app with many exclusive features, including chatting, commenting, and posting pictures/videos etc. Developing an app like Facebook also requires an understanding of programming languages like JS and Swift, which is why we provide round the clock services, with the help of our team of experts.

Get A Free Quote Calculate Pricing

Discuss your app idea with our consultants and we'll help you transform them to multi-million dollar reality. It's Free!